Best Universities compiled a list of 10 gorgeous college libraries from across the country that may make students want to study. 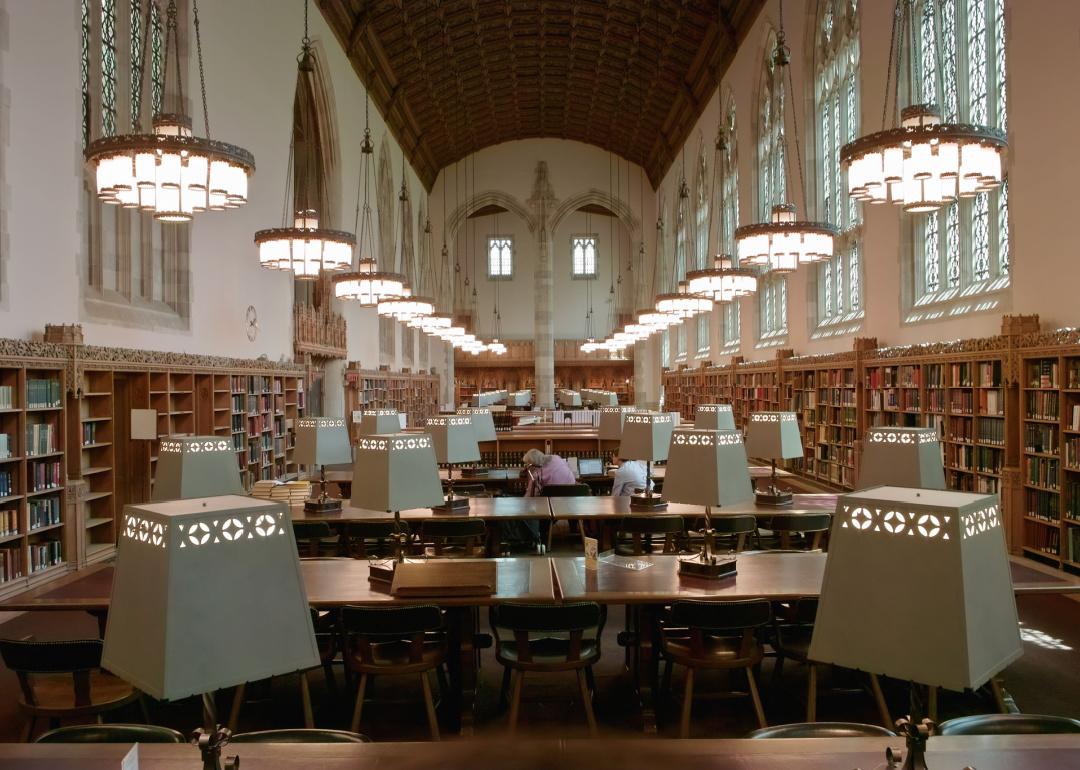 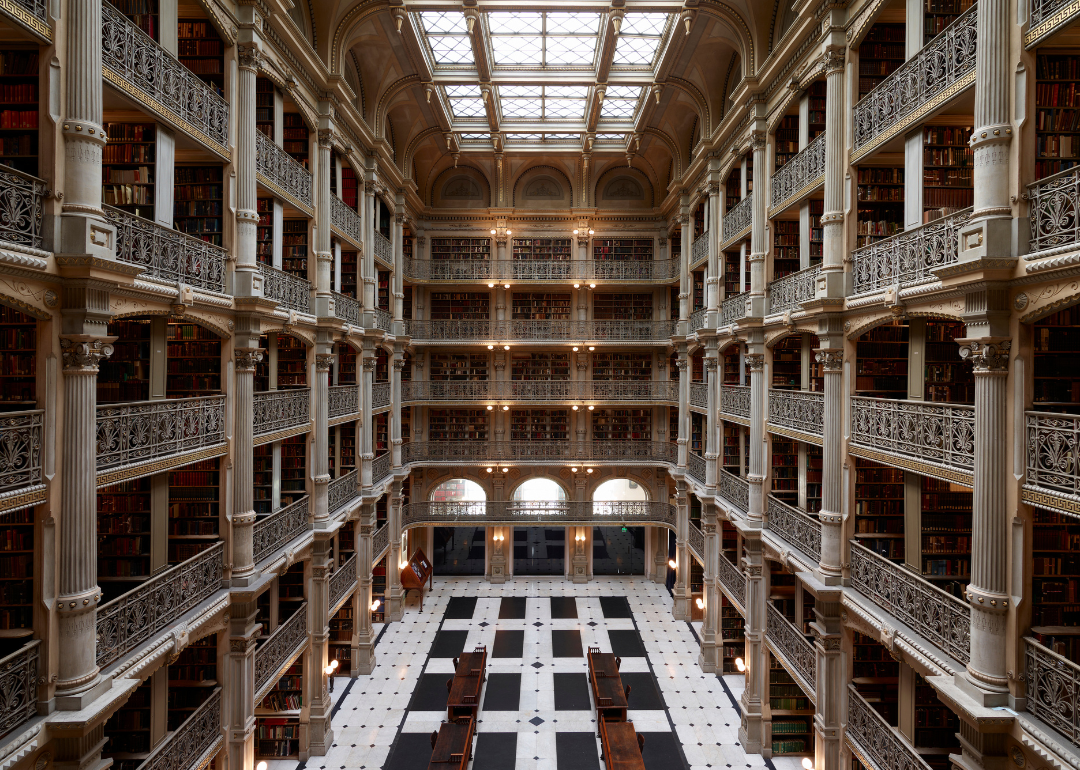 College libraries are established and maintained by a university to provide educational resources for students and faculty. The libraries house academic research and can help inspire students who are there to seek more knowledge on a particular subject or who may be interested in learning about another topic.

According to the American Library Association, libraries located in places of higher learning that granted doctoral degrees were open an average of 109.75 hours a week in 2020. These places also saw, on average, over 966,000 visitors annually. Cumulatively, academic libraries at institutions offering any limit of degree had more than 1 billion visits in 2018, which breaks down to an average of 47 visits per student.

It's not unusual to see students cramming last-minute study sessions in a library or visiting a library for alone time or to seek inspiration — especially if it's one of the libraries featured in this story. Best Universities compiled a list of 10 gorgeous college libraries from across the country. These libraries were built between the mid-1800s and 2019 and feature an eclectic array of architectural styles. Many of the buildings on this list are of great historical significance on their campus, while other library spaces were built to show the power of technology and how it can inspire innovation in education. 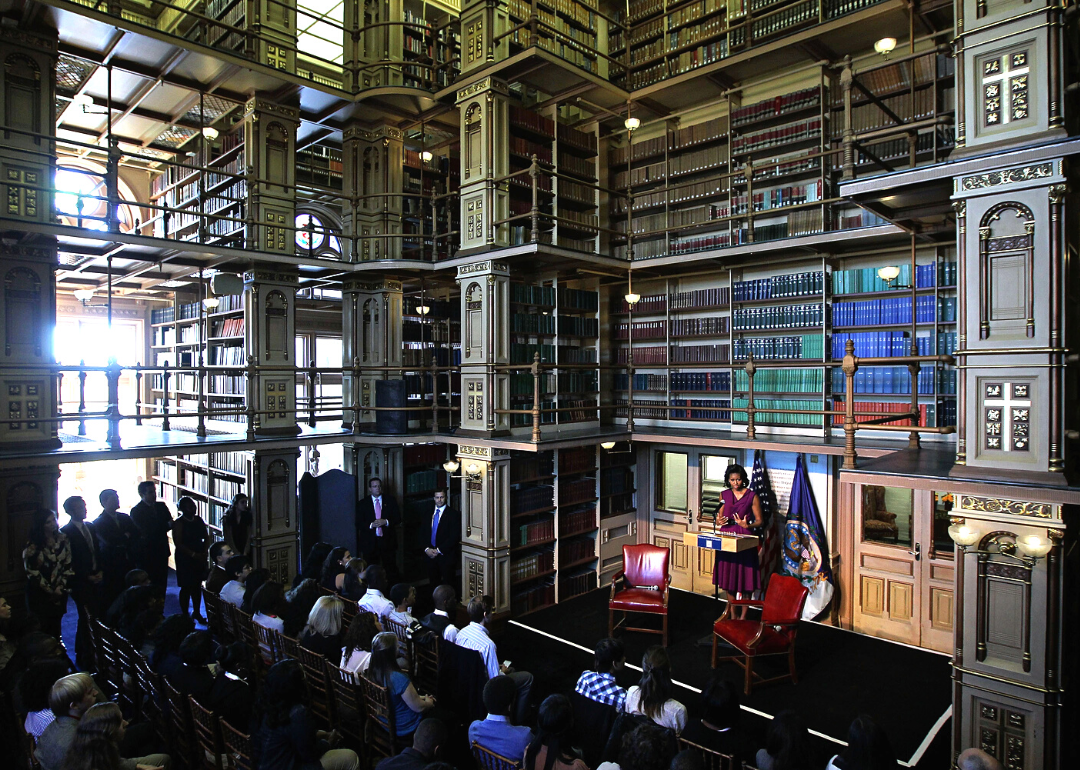 Riggs Memorial Library was Georgetown's main library from 1891 to 1970. Paul Pelz, the architect who designed the Library of Congress, oversaw its construction. It remains one of the few cast iron libraries still in existence in the U.S. While the university now has several libraries devoted to specific vocations and subjects, Riggs still serves its intended function as a place for housing books. The library also doubles as a reception space. 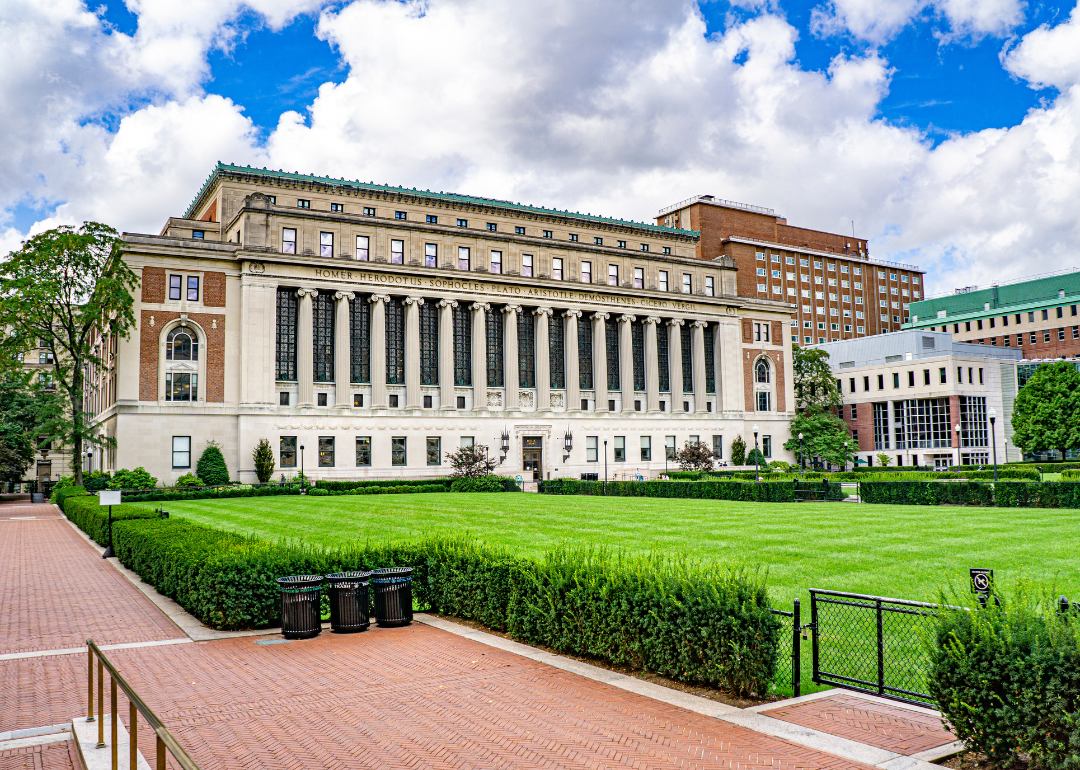 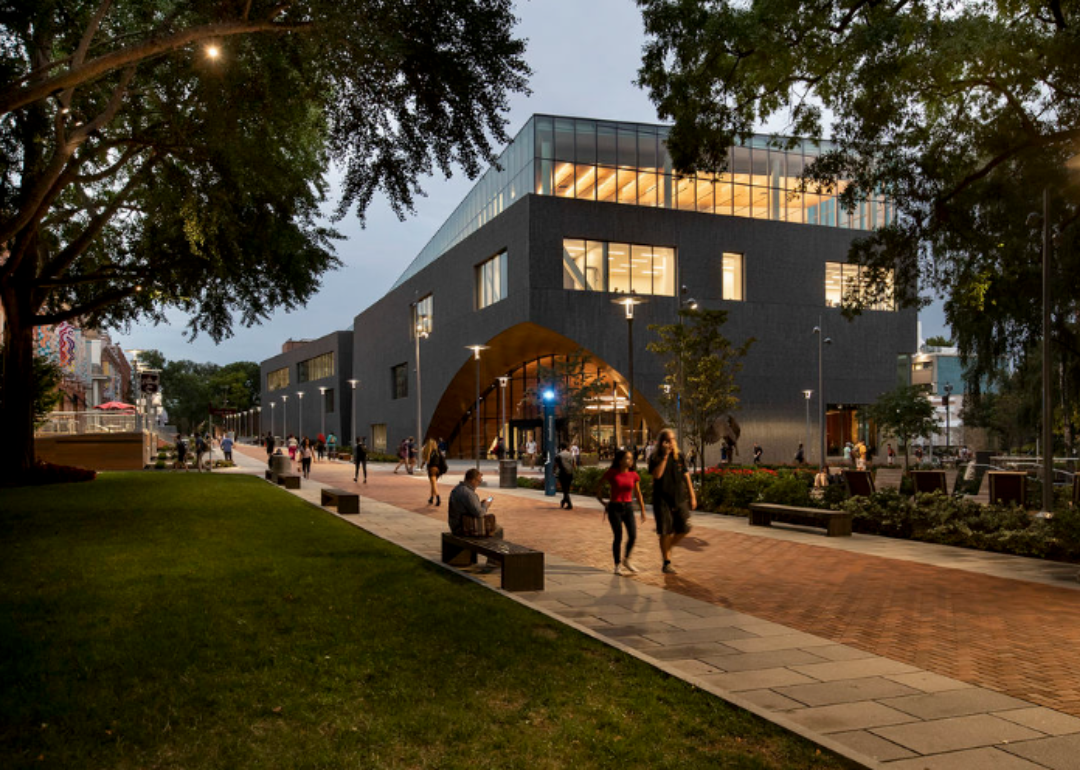 Situated in North Philadelphia, the 220,000-foot Charles Library oozes modern creativity with over 30,000 square feet of granite pieces, a total of four floors, and a collection of books set on traditional bookshelves. Design work on the library began in 2013, and ground broke on its construction two years later. Snøhetta, an international architecture firm based in Norway known for its work on the Bibliotheca Alexandrina in Egypt and the Pavilion at the National Sept. 11 Memorial and Museum in New York, completed Charles Library. The library's namesake is university trustee Steve Charles, who gave $10 million to fund the project. 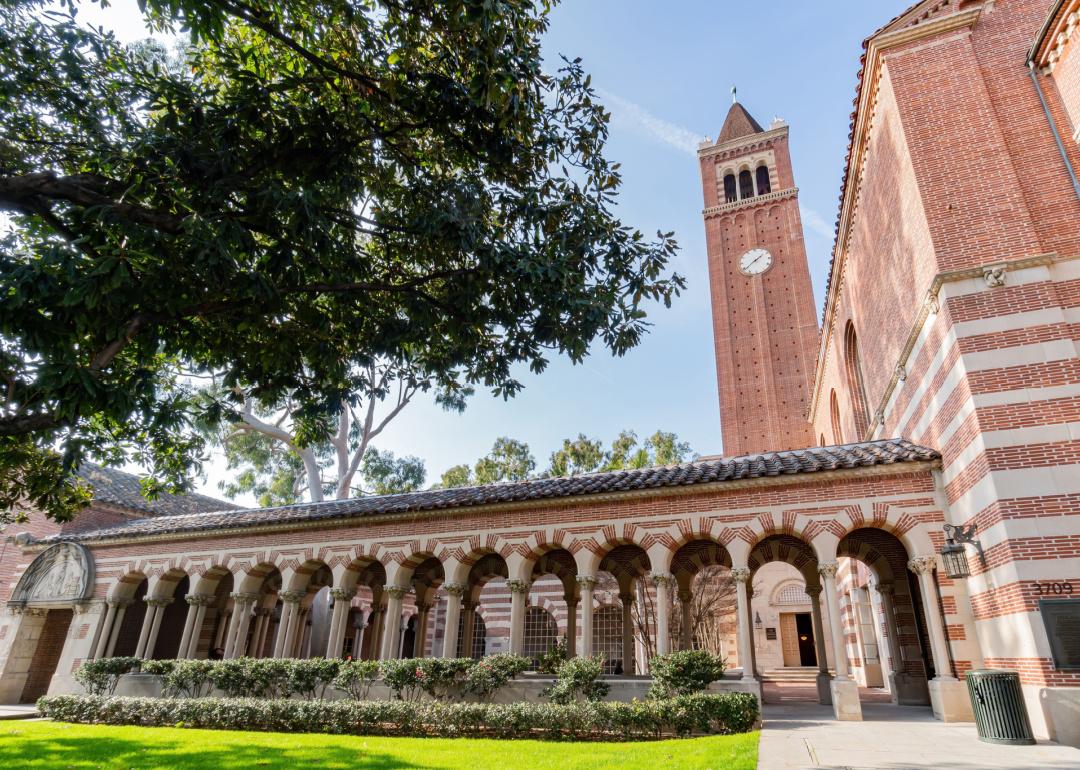 The Hoose Library of Philosophy is home to over 50,000 texts and works focused on the field of, you guessed it, philosophy. The main reading room of the library features cathedral ceilings, walls ornate with paintings, and plaques that represent philosophers. Romanesque, Byzantine, and arabesque styles served as sources of inspiration in the building's structural makeup. In 2003, USC took on a major renovation project to ensure the building and its valuables could withstand earthquake damage. 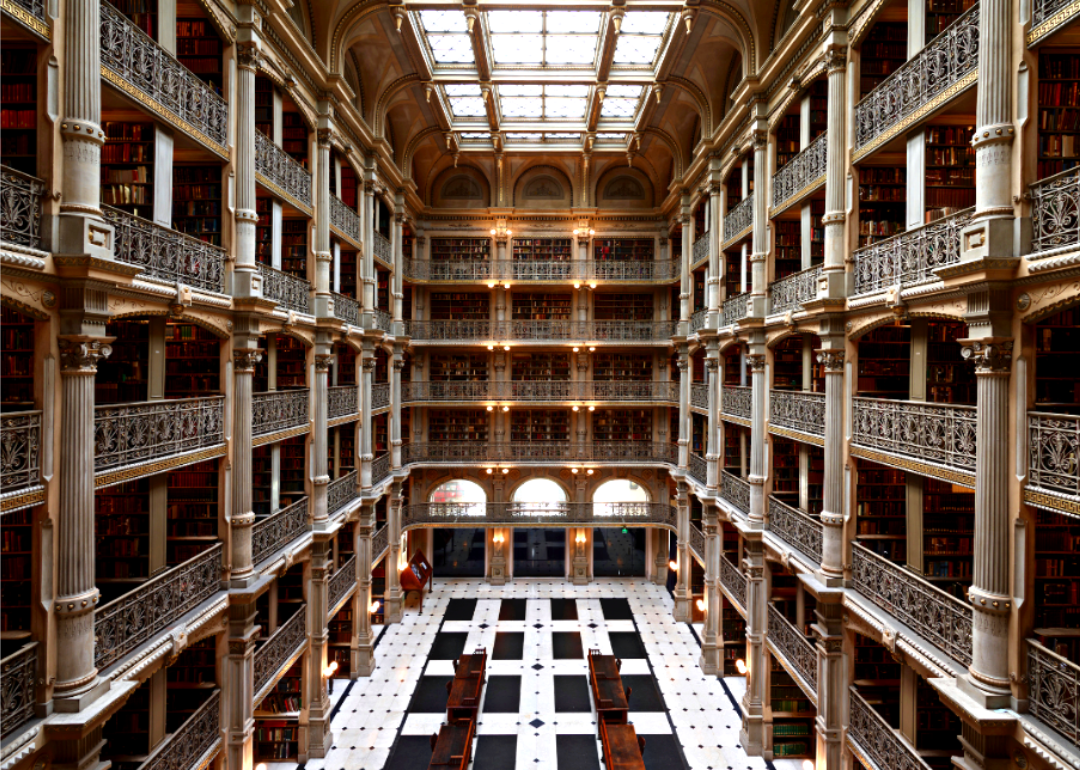 The George Peabody Library houses a massive collection of 300,000 volumes, mostly from the 18th and 19th centuries. Architect Edmund G. Lind, in partnership with Dr. Nathaniel H. Morison, the first provost for the Peabody Institute, designed the library. Its main stacks' hall features five floors bolstered by cast-iron balconies and a massive skylight more than 60 feet above the ground floor. Although the library attracts visitors for its renowned aesthetics and rich history, the building still serves as a place for education and research. 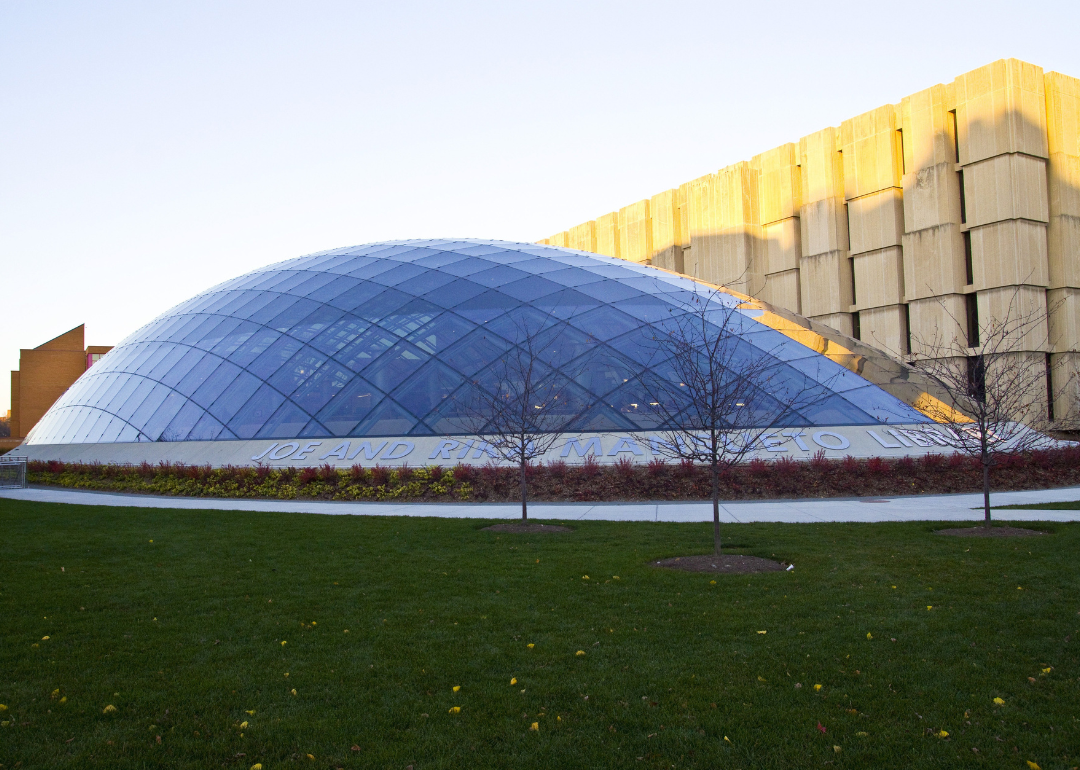 The oval glass dome protecting the Joe and Rika Mansueto Library's Grand Reading Room is quite a unique structure. The reading room seats 180, and the library is equipped with underground automated storage functions, utilizing robotic cranes that can retrieve requested volumes in just minutes. Architect Helmut Jahn designed the library, which has been cited by the Chicago chapter of the American Institute of Architects as well as awarded the Patron of the Year Award by the Chicago Architecture Foundation. 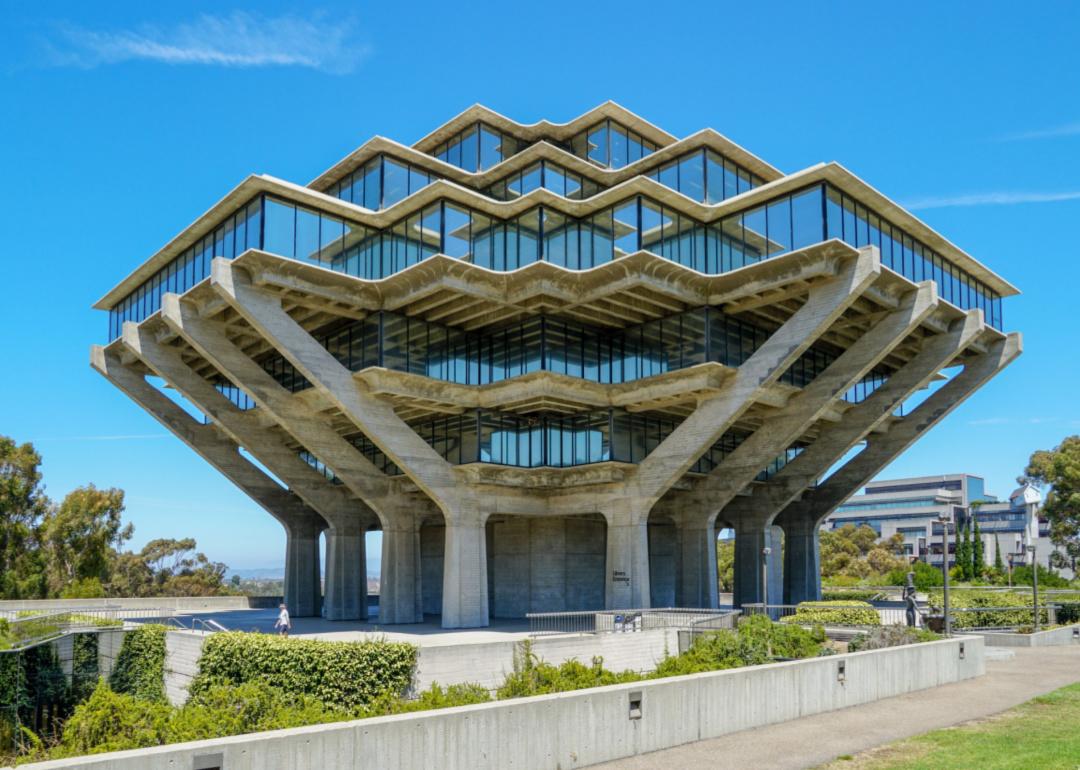 The main library at the University of California, San Diego started in 1960 as a small collection of oceanography and has since accumulated over a million works on wide-ranging subjects. Its unique elevated dome shape was designed by renowned architecture firm William Pereira & Associates to give more flexibility to how the books could be circulated and arranged within the stacks. In 1995, the library was named in honor of Theodor Seuss Geisel—known more famously as Dr. Seuss—and holds more than 20,000 pieces of original material donated by the late children's book author. 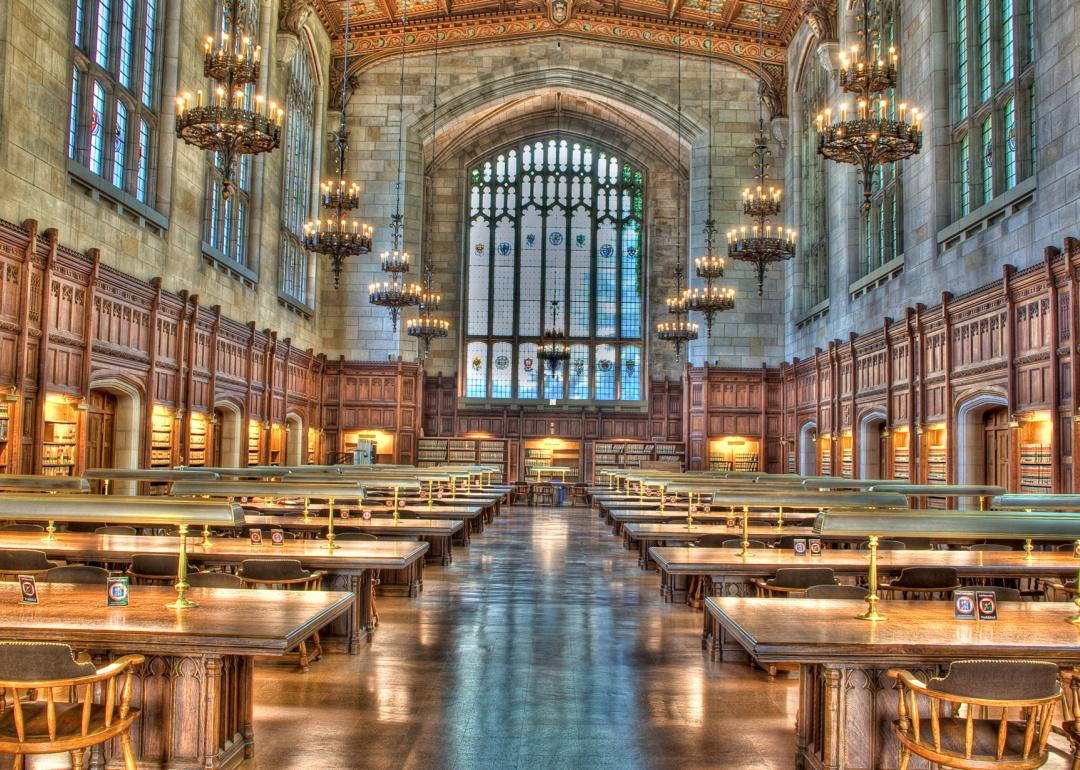 The University of Michigan's law library was built in the 1920s and 1930s and features cathedral ceilings and other Gothic-styled aesthetics. The building is one of the most noticeable landmarks on campus. The library's primary function is to build collections as well as serve in research, educating, and providing resourceful legal information to its students. 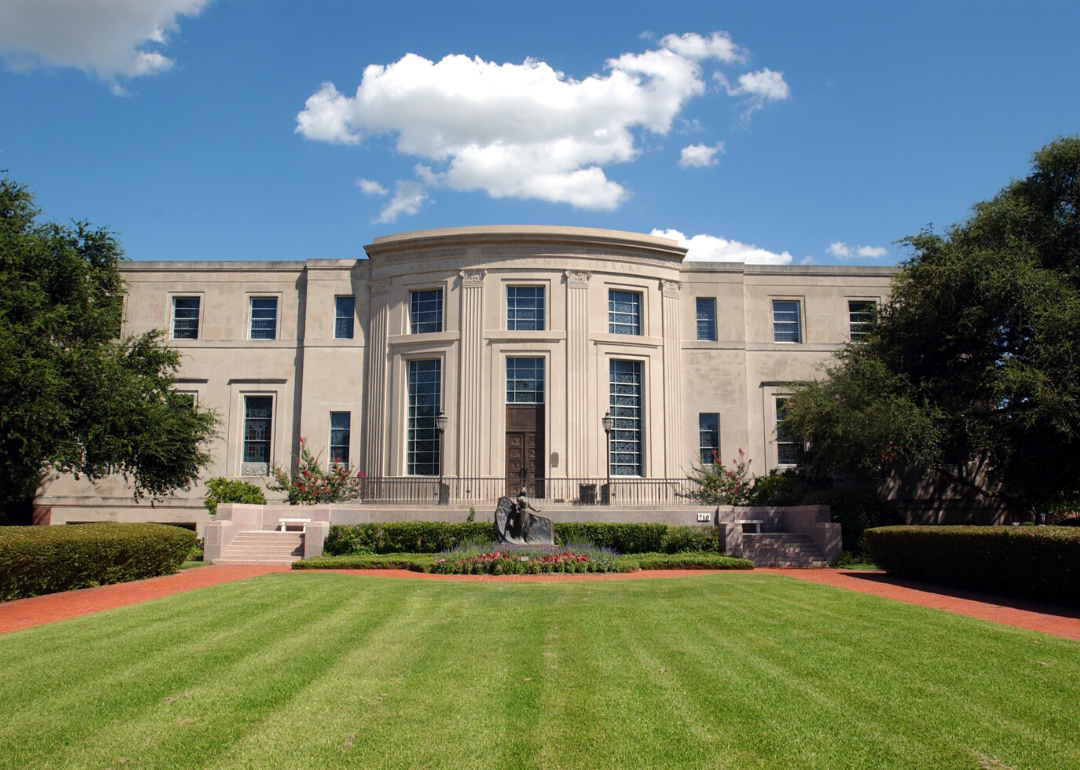 Baylor University's Armstrong Browning Library is a research center committed to the study of the lives of poets Elizabeth Barrett Browning and Robert Browning and their contributions to English literature.

The Brownings' love story began in the 1840s when Elizabeth, then a teenager, started to become more recognized for her published poems. Her second book contained lines of praise for the more well-established Robert, who, as a longtime reader of Elizabeth's poetry, wrote her a letter that said, "I love your verses with all my heart … and I love you, too." Elizabeth responded to Robert's note, and over the course of more than 500 letters they established a romance. Elizabeth's father disapproved of the relationship believing that Robert wanted to be with Elizabeth solely for her famed status. As a result, Elizabeth and Robert eloped at a church.

The library devoted to their works also holds several collections of other rare 19th-century texts.

This story originally appeared on Best Universities and was produced and distributed in partnership with Stacker Studio.